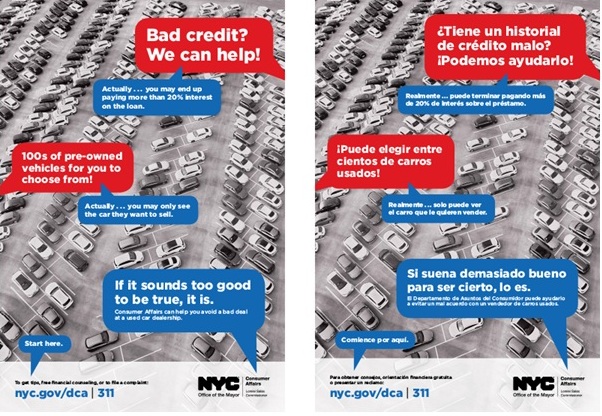 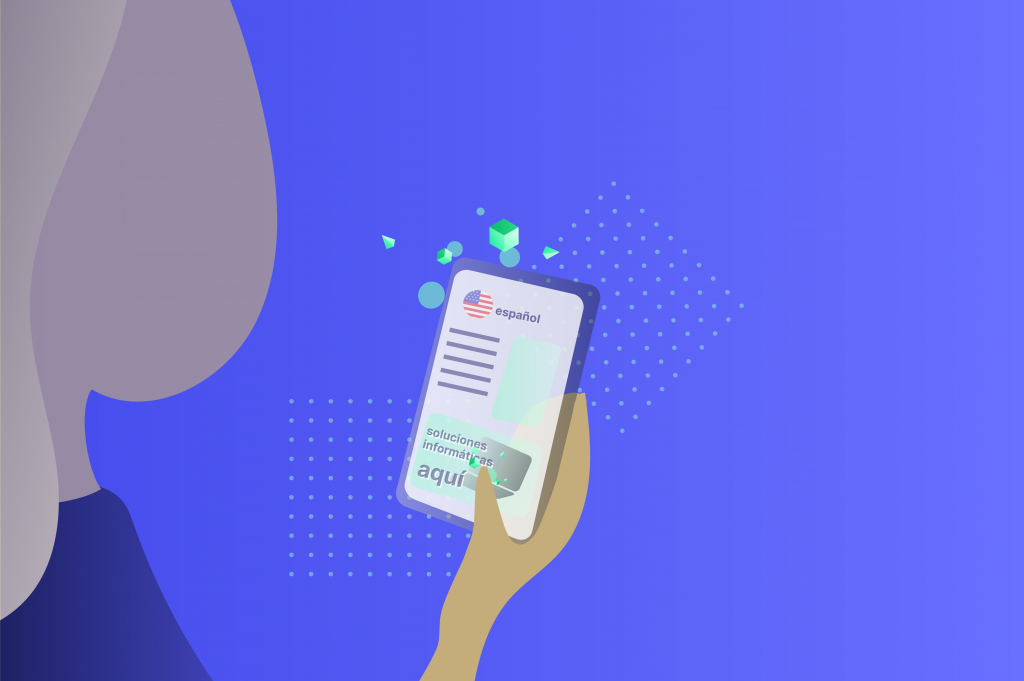 It is noted, that as of 2015, the U.S. is regarded as the second-largest Spanish speaking nation in the world, preceded only by Mexico. More native Spanish speaking people express their language in the U.S. than would be spoken in Spain, as noted from a reported study by the Instituto Cervantes, located in Spain.

Since this figure became fact, Spanish-speakers in the U.S. continue to grow exponentially. E commerce currently represents around $500 billion in the market place, with a representation of sales totaling 11% in retail the past financial year. Providing a platform for ecommerce to the 50 million or more native Spanish speaking Americans, makes commercial and economic sense. Retail platforms in the U.S. has not yet adopted a multilingual user-friendly approach, and this is evident from the current 2,45% U.S. ecommerce sites that provide multiple languages. At 17% in English and Spanish, 16% French and 8 % in German, of these 17% multilingual American e-merchants, that are Spanish speaking, are active on on a import consumer base.

From a unofficial standpoint the U.S. in comparison, lag behind most of the world from a online multilingual perspective. The linguistic landscape is imaged by U.S. business-owners to event rather English as a primary form and other languages secondary.

You may feel that this factor is a disadvantage should you want to enter a U.S. market via an English-language site, however developing a Spanish friendly site can go a long way in assuring you great returns in sales within the U.S. market.

Publishing your online store as fully bilingual without having to turn to Google translate, will reach the market of choice on both language levels. For this reason we have complied a number of thoughts and ideas on how to enter the multilingual approach and define your online presence in a more promising and active way.

Many of the multi-millions of native Spanish –speaking Americans may be fluent in English, but prefer to keep their interfaces set on Spanish. Bilingual Americans may converse in English, but their software interfaces on there mobile devices and PC’s may be kept in Spanish.
Google indicators also shows that more than 30% media use within the U.S. are accessed by browsers on Spanish and English interchangeable platforms such as page-viewing, searches, social media and messaging.

As a search-engine, Google detects the browser language setting of the user and in turn provide content with this in mind. The point here is: your SEO may have difficulty in the U.S. without Spanish as an option to facilitate with. The benefits of your site in Spanish is much more lucrative to your larger U.S. markets.

If you really want to go all-out to capture a headline place within the U.S. Spanish-speaking consumer market, it will be well worth it to streamline your Spanish-language SEO (ConveyThis has auto- functionality that does all this). Having your SEO status high in both languages, will have great benefit to your stores user-friendly Spanish platform. Search-engines are informed of your Spanish user status and grasps the attention of your anticipated customer.

After your stores setup with the proper translation, keeping record of data indicators regarding the performance on Spanish-language search-engines and other represented data indicator sites, will be important to you.
To track user language preferences to your site, Google Analytics are a excellent tool. This also includes how they discovered your site, for instance via Google or a backlink from another site and so on. (Google Analytics by the way is a free version and provides just about everything needed for the small to medium-sized business). There are many feature to choose from as well. Open the “Geo” tab located in the admin space to see the “language” statistics:

According to Google, 66% of the U.S. Spanish-speaking users, noted that they consider online ads. From the same observation, a study shows Spanish-English speaking persons to be rather active on market ecommerce centers. Further, Google also notes a study stemming from Ipsos to indicate that 83% of Hispanic American mobile Internet users, make use of online sites via their phones, that do represent the actual stores they where at. They even browse products information while physically present in the store.

With a Spanish online store, browsing wil be a breeze. Users wil find it comfortable and user friendly to view product information and to shop.
Designing your market place on a multi-language platform, and with reference to site content and also keeping in mind outbound ads, will benefit greatly on a bilingual level. Other factors need to be kept in mind though with regard the U.S. Spanish-speaking market.

1. Diversity – The order of the day

Having the ability to converse in multiple languages may also bring the aspect associated with culture to mind. Its a natural thing to feel part of the such an environment. Hispanic Americans will understand this concept well as they speak both languages fluently.

With this in mind, things such as the campaign against predatory lending practices, active in New York City, bring a distinct message that may present the same in both English and Spanish, but with regards a product, more thought may be needed.

Advertisers understand this and duly arrange their ad campaigns accordingly, that will include Spanish versions of their ads. They may also use a variety of actors and models including such tools as slogans, color variations and script/copy’s different from the English ones.
A good example is Payless ShoeSource. They are a discount shoe store located within the U.S. There focus market was aimed at Hispanic consumers with TV and online advertising primarily focused towards the Hispanic market and less English speaking ones. 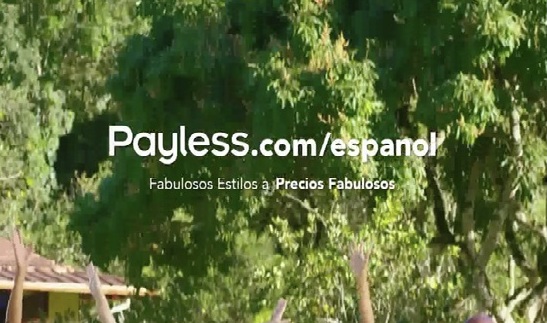 The process – establishing of Hispanic-focused consumer advertising strategies specific and away from English concepts, has data to support such a project.

ComScore, a data quantifying company, have statistical information with regard ad campaigns: These campaigns that are marketed in Spanish only, that came from English and where for the overall U.S. market and then “changed” to suit the Spanish versions, and also text and dialogue translated into Spanish from the English text.

As is, the outcome showed without doubt the Spanish-language audience, the initial type, had for the strategies incorporated for their preferences. 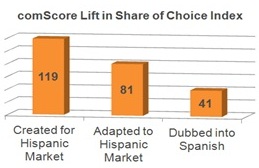 With a eye on the ComScore graph above, the Spanish-speaking American will as a consumer be drawn to and identify with campaigns freshly oriented toward the Hispanic-speaking customer.
So what lessons are learned from this as to a online retail provider, now entering the U.S. Spanish-consumer market? Well the fact remains, a language adaption is a firm start-Spanish media and copy should be a close follow-on in this regard.

As was noted within the Google study related to the 66% responsiveness, as rated within Hispanic-speaking online advertisements, shines light on cultural aspects too. With this focus in mind, such things as “food, traditions, holidays and family” are high on the menu with the Hispanic-American community.

2. A. Step in the right direction

As noted before, with the Spanish-speaking native environment indicating strong growth within the U.S.- brand names have a lucrative outlook to this market. There is a rather intrigued culture of Spanish-language social information from Television, radio, websites and other media.

As noted from a previous discussion, ComScore’s study also indicated the fact that Spanish-language online advertising perform beter than Television and radio now. Not to mention also that exclusive online advertising in Spanish came in with a rating as depicted under Share of Choice with reference to radio, TV ads under similar brads and campaigns.

Reportedly, BuildWith.com, noted that 1.2 million of the U.S. websites are assessable in Spanish. This is from over a 120 million site domains within the U.S and places that figure at just about 1%. Considering the amount of internet usage by Spanish-speaking Americans, its conservable that little is catered for their market. The online Spanish-language media related to websites and advertisement linking websites, definitely lie outside the great amount of Spanish-speaking users. The market is open for growth within a rather large sector of Hispanic-speaking users.

Noted from previous discussion, media device to Spanish-language SEO as a default language setting, as Spanish. Addressing further the need to improve communication by streamlining devices for Spanish-speakers content.

In the U.S. the bilingual approach as a business strategy, would be to acquire the assistance of Hispanic-speakers who are comfortable with the language and other environments with their communities and cultures.
To expand on this approach, the format of changing the context may stand further apart from the adaptation on a textual interface platform and with the walls of understanding on the linguistic level, in other words-relating to information and content written but with a twist to closer embrace the environment associated. On this level, the philosophy of wining sales to consumer bases will be beneficial within English and Hispanic user idiom.

Not withstanding the fact that changing the context requires a special approach on most levels and not forgetting that insight to the market users, and in this case the Hispanic-speaking customer, will require campaign development to their needs.

Tools of the trade refer to Univison with commercials, advertising on El Sentinel’s online edition and also the use of Google Adwords to grab Hispanic markets, however quality assurance is the mum word here. So said, your website experience need to be exceptional at the very least for your Spanish-speaking consumer.

Creation firm Lionbridge, with a focus on Globalization and content aspects, has engaged research within online media statistics focusing on the U.S. Hispanic user-of note here is that consistency is the buzz word with Hispanic markets. Provide a extra-ordinary service to your Spanish-speaking customer in Hispanic orientated content, the same as the English-speaking side, that will include a web base in Spanish to your market.

From a purely technical perspective, challenges could be somewhat of a different animal, especially regarding the aspects of facilitating multiple language platforms within one page. To note such items as page displays and paragraph lengths, headlines test modules and other areas.

Software depending, a few things can go a long way to streamline the process. (Squarespace, Webflow and WordPress to name a few). The end-state is to have a smooth transition and ease of use on this multi –lingual platform of English and Spanish.
Understanding the client

Considering the aspect of design, approaches to end user reaction within this media need to be understood. We have a few tricks that may help towards this development- this will include visual media in the language of choice (we offer assistance with that), including vorms, popups and other tools you may need on your site.

Not being a Spanish-speaker yourself, your site can be absolutely on par with your marketing just as good as the English side. ConveyThis.com is a great tool on this side of development and provide super translation to your Spanish site including multiple languages if you require too, and work within your dashboard. Assistance from a native Hispanic-speaking translator to verify your site is a good idea.

From “untapped and under-served” to the Spanish-English bilingual boom

Maintaining your websites SEO and translating the website to Spanish while keeping a tight rein on the Spanish-language search-engine platforms, is a sure-fire way to be a online force within the bilingual U.S. market place.

These can be done within ConveyThis.com, regardless of the platform in use. With regard media form, video and image replacement between languages to translation customization is possible as well as Spanish content on all levels while maintaining your English associated branding and standing, done within a short period of time. 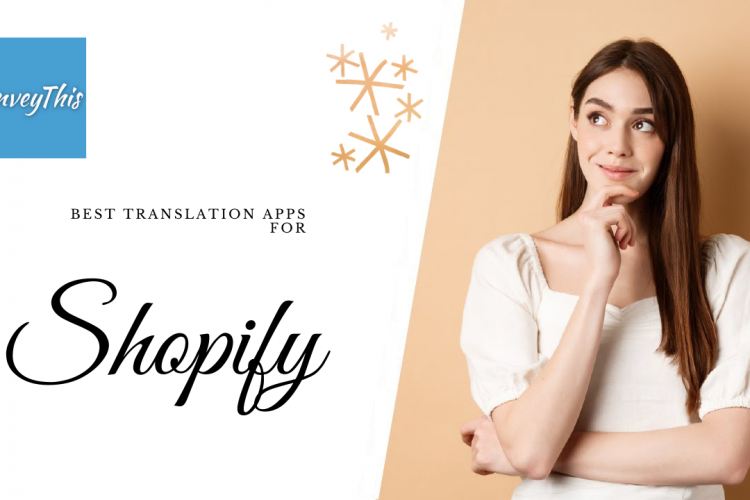